The Four Stages of Competence 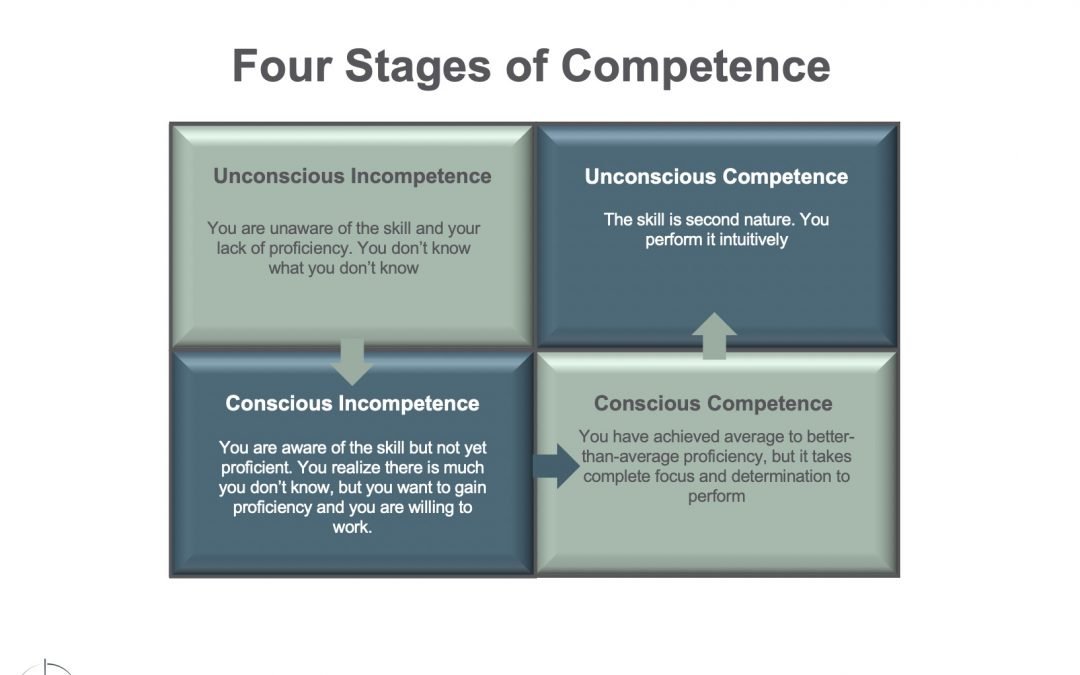 I reported to flight school in the fall of 1991. From the day I arrived, helicopters dotted the skies over lower Alabama day and night. Literally, you could not sling a dead cat without hitting three aviators walking down any street in Enterprise, Alabama.

I’ve always been able to pick up new skills fairly quickly, so I was confident that flying would come fast and easy. After all, if those guys can fly, certainly I can. Arrogance? Over confidence?

The day finally arrived when I would learn to hover. My instructor pilot flew us to a stage field with an open flat area the size of two football fields. He brought the helicopter to a three-foot hover. It was like we were sitting on glass – suspended motionless in the air. In fact, the helicopters hung so immobile in the air that I could have sat a glass of water on my knee without spilling a drop.

He then told me to come onto the controls with him. I grasped the cyclic with my right hand for steering, my left hand rested on the collective control, which is essentially the up and down lever. Gently, I placed my feet on the pedals, which gave me tail rotor authority.

Once I was settled, he said, “Okay, I’m going to let go. You can see that I’m not moving anything. Just don’t move and it’ll sit here.”

He removed his hands and within a second the helicopter began to ever so slightly drift to the right. I pushed the cyclic to the left, but the old UH-1 Huey did not respond immediately, so I pushed the cyclic further left. Then, suddenly, it lurched left, so I moved it back right, but it also began to descend at the same time, so I pulled up on the collective. Now, we were in an elevator going straight up, but I had other problems. When I pulled up on the collective the helicopter began to turn (spin) at the same time, so I crammed the pedal in to stop it. It seemed as though a demon had possessed the darn thing.

In less than five seconds, we were over twenty-five feet above the ground and almost completely inverted, while sliding sideways and spinning at the same time. I was convinced that this was how my life would end – in a cow pasture in lower Alabama.

Suddenly, I realized that every control input affected the other controls. If you pull up on the collective, you have to put a little pedal in because the aircraft will turn. There was also a lag from the time you made an input until it actually manifested itself. I was trying to respond to everything, versus anticipate. Reaction doesn’t fly a helicopter smoothly. I was suddenly conscious of the fact that I did not have the skill to fly at the time, but let’s back up.

In the early 1970s, the four stages of competence showed up in several books and was integrated into the Gordon Training International system. The model has four stages that a person must work through in order to master a skill. The four stages are:

Unconscious Incompetence: The individual does not understand or know how to do something and does not necessarily recognize the deficit. They may deny the usefulness of the skill. The individual must recognize their own incompetence, and the value of the new skill, before moving on to the next stage. The length of time an individual spends in this stage depends on the strength of the stimulus to learn. This was me in the fall of 1991. I assumed I could fly. How hard could it be? I did not know what I did not know.

Conscious Incompetence: Though the individual does not understand or know how to do something, they recognize the deficit, as well as the value of a new skill in addressing the deficit. Making mistakes can be integral to the learning process at this stage. This was me after my instructor demonstrated to me what I did not know.

After graduating flight school, I moved to my first assignment. The instructor pilots worked with me long enough to trust that I would not kill myself or another pilot, then they turned me loose with a pilot-in-command. He took me into the southern deserts of New Mexico to a concrete pad that had a dot painted on it. He landed the helicopter with the nose on the dot. He then told me to pick the helicopter up to a hover with the nose on the dot and manipulate the controls so as to circle the dot 360 degrees with precision. If I was not perfect, he demanded that I do it again. Once I mastered this, he put the tail on the dot. “Now, circle it with the tail remaining in place,” he said.

“But I can’t see the tail of the helicopter or the dot,” I protested.

“Feel it,” he said. “You know you are on the dot sitting here, so judge your position and distance from other things around you and circle it.”

I could do it, but it took every ounce of concentration and focus I could muster. I had entered the third stage of competence – conscious competence.

Conscious Competence: The individual understands or knows how to do something. However, demonstrating the skill or knowledge requires concentration. It may be broken down into steps, and there is heavy conscious involvement in executing the new skill.

After five or six hundred hours of flying and focused training, I could fly the helicopter in formation with my left hand resting on top of the cyclic while eating a ham sandwich with my right. I was unconsciously competent.

Jimmy Blackmon is a managing partner at Exactus Advisors. He is the author of COWBOYS OVER IRAQ – Leadership from the Saddle and PALE HORSE – Hunting Terrorists and Commanding Heroes with the 101st Airborne Division.